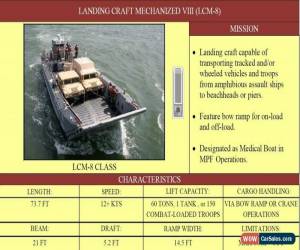 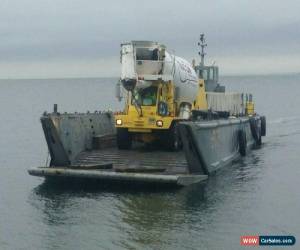 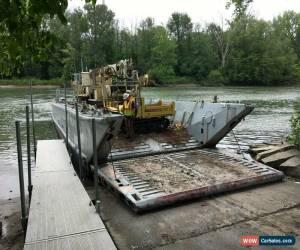 This listing is for 74' former US Army LCM-8 Landing Craft. She is fully operational and would be suitable for variety of uses. Similar boats are still in service with the Army.

She was Army property until 2013 and received government maintenance and constant upgrades. She is now powered by two V-12 Detroit Diesel engines rated at 500 horsepower each that turn 34" propellers. Her two tanks hold combined 1,146 gallons of diesel. Fully loaded she was originally rated for knots (10.4 mph) at full speed with the 325hp engines she was originally delivered with. These V-12 engines were huge upgrade and are much more powerful and efficient. She can be operated very efficiently at lower engine speeds.

This is very tough boat, her first or compartments under the cargo deck have double bottom to protect her if the hull was ever damaged from grounding. I'm told she can remain operational if all but one of them and the engine room remain un-flooded. was also told she is rated for 8' seas loaded. We have run an excavator in her cargo bay and she is pretty stable.

I have used her to put stone on the shoreline to protect homes from wave damage. have used her to transport heavy equipment. brought her half way up the north Atlantic from Norfolk to New York Harbor.

In the past few years she was tuned up and serviced by Detroit Diesel engine specialists. We upgraded her to hydraulic steering with electronic joystick control, installed new electronics, rewired her, and replaced her instruments. We upgraded her to 24 volt batteries for each engine with 24 volt starters and alternators. Her 120 volt AC 30 amp shore power system charges the batteries and she has 24 volt dc and 120 volt ac lighting. 24 volt and 12 volt dc breaker panels distribute power to vhf radios, depth finders, and GPS. Her engine has PTO hydraulic system that operates the bow ramp and could be used for other auxiliary systems you may want to install like hydraulic spuds or hydraulic cranes. have seen these boats adapted to have push knees on either side of the bow ramp or removable style that sit on the ramp door.

I am selling her due to the flooding of my marina business from increased lake levels. have other tugs and barges can use so am selling her to replace damaged buildings and to replace fixed docks with floating docks.

She is currently docked at Gibbs Marine on the Genesee River in Rochester, NY right on Lake Ontario. For an additional cost we could deliver anywhere on the Great Lakes and connected bodies of water. Please contact us if you would like more information or an appointment to come and see her.