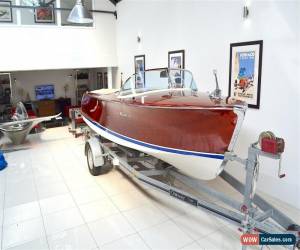 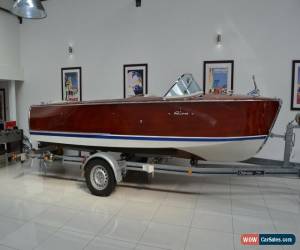 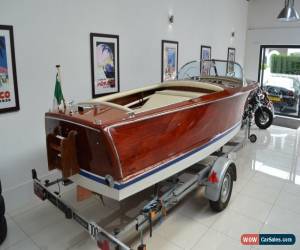 We are very fond of Riva's here, and always try and have one available. Built by Cantieri RIVA, Sarnico, Italy in 1962, being hull number 588 from production run of 426, this boat is in beautiful restored condition, needs nothing and is ready for the water this summer! She was sold new to Herr Gruner and delivered to Munich where the boat lived for most of its life before coming the the UK couple of years ago.
In the 1950s Carlo Riva, grandson of the company's founder, approached his father, well known builder of racing speedboats, with his idea to transform the production of wooden sports boats on the American, mass production model. Despite initial hostile reaction from both family and financiers, Carlos raised the capital and in 1951 started production of his first model, the Sebino designed exclusively for mass production at the family factory in Sarnico. year later, he started to also build larger version and this became known as the Florida.
Hand built in Honduras mahogany with American Chris Craft motors, they became an instant success with the Mediterranean smart set and many popular figures such as Brigitte Bardot, who bought Florida No. 573, and Sophia Loren owned and were seen in one. By 1958 Riva had adopted his famous triple layer mahogany construction, embellished with the 24 coats of varnish which gave the trademark lustrous deep finish.

The Florida ceased production in 1966 after total of 426 were built and was replaced by the Junior. Carlos Riva sold the company in 1969 and although the name lives on, still producing luxurious motor launches, the Classic period of manufacturing was ended.


Very nice condition Taskforce 18These are commercial spec boats and are considered one of the strongest builds in their class.Mercury 100Hp fourstroke which makes this boat fly whilst offering excellent fuel economy.Original gel which is practically unmarked.Loads of quality stainless ...