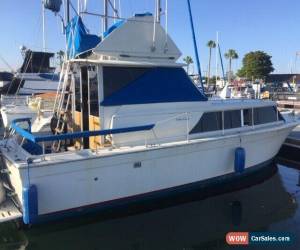 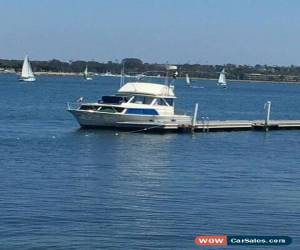 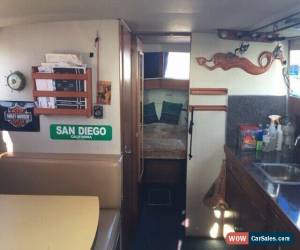 Classic Chris Craft Commander For Sale. 31 foot. Built in 1969, this boat has solid fiberglass hull and would be an excellent bay cruiser for growing family or couple of friends to share for fun times in San Diego. We often take it out and throw anchor in the bay to swim and BBQ or drop line in the water then crash overnight. We have owned the boat for the past years and have made many improvements.
The flybridge helm has been polished and customized. It has new speakers, horn and blue LED lights. The bench seat was just recovered and reinstalled. The canvas covers look almost as good as new. The exterior mahogany and teak rails and doors have been refinished recently with satin varnish. There are canvas covers to help maintain the look. There is large swim step with newer brackets that were custom made. It has bait bags and new bait pump. The cockpit also has blue LED lights which look awesome at night. There are anchors on board and large front deck to lay out and take nap on. The hull is professionally cleaned every weeks and the zincs are maintained as well. have been told that the bottom is in good shape but would need bottom paint in the near future. All of the exterior lights work and some have been upgraded to LED including the brand new stern light. There are newer black bumpers and dock lines. The windows have Limo tint and the entire boat was just detailed.
On the inside of the boat, there is large V-berth and the dining table that has seats that fold out to sleep 2. There is freezer box but we removed the door(we still have it) and set an A/C powered dorm fridge there so we always have cold drinks at the dock waiting for us. There is large holding tank for fresh water and microwave to warm up food or make popcorn. The lower helm has newer director chairs and nice seating area for hanging out with friends. There is Xantrex battery charger, VHF radios and new power inverter. We recently replaced the stereo with JVC unit that has bluetooth technology and RayMarine GPS/FishFinder/Depth Sounder that you can receive the information on your phone or tablet. The Joker Valve on the manual flush toilet was just changed and it works great. Most of the interior lights are new LED and we installed some LED rope lighting that can be set to multiple different color settings by remote control.
The boat is equipped with twin inboard small block GM 327's. Both have been rebuilt in the past but the starboard was more recent during our ownership. Thus, the hours shown on the gauges are not accurate. Elbows, risers, impellers, distributors, wires, caps Mallory rotors and batteries have been changed or cleaned on both engines. The Edelbrock carbs have been professionally rebuilt. The port engine runs well but has lower compression in cylinder. The trim tabs are in good working order. Both stuffing boxes have been repacked. It is currently registered with the Coast Guard. This is an older boat but it really shows pride of ownership. We love to hang out in the marina and to watch the sunset from the flybridge. It is currently docked at Mission Bay Yacht Club. The slip is not transferable but other Mission Bay slips are available. We have invested time and money into her and hate to sell her but we want smaller, faster boat to fish the local kelp paddies. It's time to let others enjoy. $9800


UP FOR SALE IS FULLY RESTORED 1950 CHRIS CRAFT 19' RACING RUNABOUT. PURCHASED IN 1993 AND DISMANTLED IN '94 BY DICK SLIGH OUT OF HOLLAND, MICHIGAN, HULL NUMBER R-19-291 IS THE ONLY RACING RUNABOUTS TO COME FROM THE FACTORY WITH AN ML-145 HP ENGINE. NO SCREW LEFT UN-TURNED, ORIGINAL PARTS WERE ...