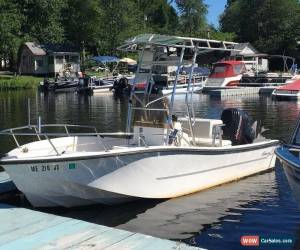 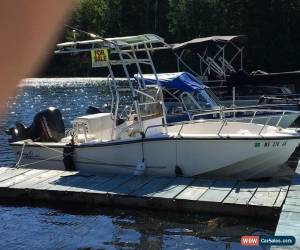 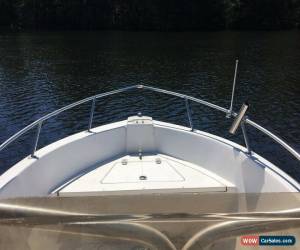 Henry is the company owned byHenry McKee, brother of McKeeCraft owner Lanness McKee, both brothers worked asdesigners for Boston whaler in the 1960s before striking out on their own. TheMcKee family has long history in the boat business. Starting in Fairmont, NCwith brothers, Henry and Lanness McKee that formed McKee Craft in the late1960's. Henry designed their first successful boat models the 14' 20'.In 1974, Henry moved his family tothe Brunswick County coast where he designed another line of the foam filledboats. The models 15' 26' known as Henry Boats. With his four sons theyproduced these boats for years.
2002 Johnson 115 two stroke made by Bombardier.Considered one the best carburetedmotors ever made. Bombardier bought outOMC/Johnson/Evinrude in 2000. They re-started production in 2002, after makingsubstantial improvements to the engines. Carburetors were rebuilt last year.Thermostat‘s were replaced. Water pump was checkedVRO and fuel pump work rebuilt. Beam of boat is foot 6inches. New gas line run from gas tank. Gastank was flushed and cleaned. Only ethanol free gas.Oil tank for VRO is under the centerconsole Weblon Regatta fabric is made byHerculite. It is durable, non-breathable, extra-tight waterproof, providesexcellent protection against mildew and Rain Kleen® finish on the weather side,  surface treatment that helps to extendfabric life while maintaining color intensity.  herculite.com/marine-fabrics/weblon-regatta-fabrics

Designer and Co-founder of"Mckee Craft Boats" established in 1966, Henry O. Mckee had not satisfiedhis desire to create the ultimate in comfortable, dry and stable riding smallcraft. Leaving "Mckee Craft Boats" in 1974, he ventured out on hisown to pursue this vision, and established Henry O. Mckee Sons nearBolivia, NC. After several years of experimentation, he and his sons begansuccessfully producing the "Henry O" in 1983. After realizing thatconventional hull designs were not the answer, he began creating radicallynew and streamlined hull in 17' model. This hull design proved to be the fulfillmentof Henry's vision, stable, highly maneuverable soft dry ride. Later versionsof this innovative design came in 22' and 16' lengths. Henry is much more commonly seenin Georgia and the Carolinas, it was produced in North Carolina by Henry McKee.The company was bought by Taylor manufacturing and they produced boats underthis name for several years in the late 90s. The McKee produced Henry O’s areregarded as superior to the Taylor version Lower unit is aftermarket SEIExpected amount of cosmetic wear andtearFor winter storage, the hatch to thelower bilge should be opened and sponged dry


This is an awesome opportunity to own great sailing boat for some elbow grease and very little money. The boat was being refurbished when the previous owner died. The motor is missing the head and looks like it is junk, and the interior needs to be put back together. This is the largest 31' boat have ...