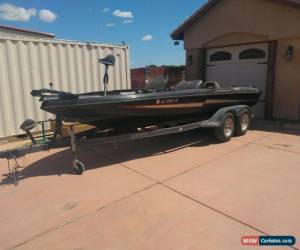 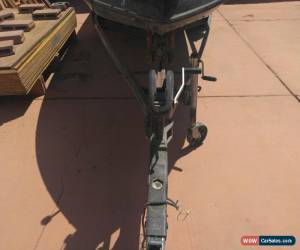 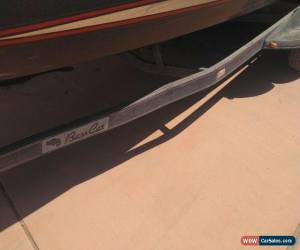 This boat will sell for the actual bid price.  No surcharges.  No convenience fees.  No bull.

Why am selling it?
Well am just tired of it.  Its got rough history starting with theday bought it, "brand new."  was told it was new old stock boat,but after dealing with few things over the first year the salesmantried to tell me in public forum, "You knew it was demo boat whenyou bought it."  Sigh.  No didn't.  Well that dealership wentbankrupt so there is not much more to say about them.

Outboard NO MOTOR.
I am keeping the outboard had on it for another project.  It ran high60s with the original Opti 225 and mid 70s with full load with a250ProXS, but the boat comes with NO MOTOR.  The data plate says theboat is rated for 285HP.  The newer versions of this same boat arerated higher, but Basscat Boats made it clear they would not rerate theolder models.  Personally don't care what motor you put on it afteryou buy it, but it will come with no motor.  also removed the cablesand smart gages that go with the motor.  They will not be coming withthe boat.

Fishing Seats
I'll let you have the one in the picture, but you probably don't wantit.  The king pin is bent.  tried to fight into brushy tunnel in aback channel on the Colorado River and the overhanging brush wasstronger than the pedestal.  It bent before pushing the brush out ofthe way.  also have an original sit down seat for the back you canhave.

Carpet
The carpet is totally shot.  Most of it was the original carpet thatcame in the boat, and to be fair it held up pretty well.  startedremoving the carpet with the thought to fix up the boat nice again, butnever got any further than stripping the front deck, sole, and backdeack.  did remove all the doors, but by the time got to that pointI just lost all interest in this boat.  I'me sure it will be greatboat for somebody, but just don't want ti anymore.  It doesn't suitmy local conditions as well as something else would and am just todarned busy these days to take the time to mess with it anymore.  Ihave NEW OEM CARPET from Basscat for the boat.  You will get the rollof new carpet.  It is more than enough to recarpet the boat.  Iactually ordered little extra so would have some for anotherproject when was done.  Picture of roll and shipping label from BCB inpictures.

Compartment Seals
I  think have most of the compartment seals.  One might be missing. They are not in the boat, but you will get the ones have hanging onthe wall.

Bench Seat
As you can see its seat setup.  They are in rough condition andwill need to be replaced or atleast reupholstered.  Unless you know youwill have two passengers I'ld get rid of the middle seat and get stepbox from Basscat in its place.  The seats are not mounted in place. They are just setting there.  I'd planned to reupholster them after Ifinished hte carpet, but like said in the carpet section.  justlost any desire to keep this boat.

The Trailer
The trailers was "totaled" by the insurance company in 2007. It isbent and one of the axles looks slightly more arched than the other. Both fenders are in bad condition.  value the trailer at zero, but Ihave been pulled the boat several thousand miles on that trailer, andamazingly it didn't seem to wear out tires abnormally.  won't tellyou that it won't eat tires if you decided to haul it acrross thecountry, but my experience with runs of upto couple hundred milesdidn't seem to indicate it would.  The tires on the trailer are "new." Well sort of brand new.  bought them over year ago, and finally gotaround to mounting them few months ago.  They have been used to movethe boat around my property few times.  The little rubber tits arestill on them.  There are only four (4) tires and wheels.  There is nospare.

Jack Plate
This is an old jack plate made by the old Detweiler company before theywere bought up by somebody else.  It does not work, but if runbattery to the motor can here the mtotor turning, but the jack platedoesn't move.  It had gotten bit sloppy last time it did work, so itprobably needs new bushing and seals.  The cost to rebuild it might bea significant portion of buying newer better jack plate, but it comeswith the boat. You can keep it or pitch it after you get it home.

Steering
The steering on the boat is hydraulic, and it worked pretty well.  Evenwith the bigger outboard.  would strongly suggest you flush thesteering system and refill it with new factory reccomended steerignfluid.  The actual steering cylinder is staying with the motor.  Youwill not get that cylinder and as mentioned the motor does not comewith the boat.

The Hull
Its got some scrapes on the bottom, and little dings here and there. It will not sink or break on you under reasonable normal use or evenreasonabley hard use.  It has been repaired.  In 2007 flippeded andtotaled brand new 2008 Chevy truck when feral invasive burro ranout in front of us on the way home from fishing.  The boat and trailerDID NOT flip, but the trailer was bent and the tongue lifted up highenough in the air that the sponson area of the port side of the boatdragged on the asphalt.  Repairs were done by Hale Marine in 2007 or2008.  have lost track of exactly when as it took forever to getthings done due to BCB dealer (now out of business) who sat on theboat for months doing nothing.    The reason the top cap of the boat issolid black is related to misundertsanding with Hale Marine.  Theoriginal repair started to show crack after about two years.  askedaround for somebody good, and was told of local guy named AbleSolis.  He cut out the crack, and reglassed the area very well.  Hetold me he built up the repair from behind the existing glass out. Should be stronger than the original hull.  The boat was run hard foryears, and there was never any further sign of problems.

I do have another rub rail in box that might be in better condition than the one on the boat.  Regardless.  Its yours.

Other things included
No.  There is nothing else included.

So how about that motor?
I said it atleast couple times above.  NO MOTOR.  There is no motor available with this boat or separately.

QUESTIONS:
If you ask questions already answered here will not respond.  Theboat is not worth lot to me any more.  That includes my time.

Warranty Shipping
There is no warrnaty expressed or implied.  If forgot something toughluck.  tried to be thorough.  will not ship or haul.  The boat isfor auction AS IS and WHERE IS.

I see Ebay has placed comment that says "shipping quote available." NOT FROM ME THERE ISN'T!!!

LOCATION
The boat is located in Yuma, Arizona.  If you don't know where that is Google it.

Stop the Auction
If you ask me to stop the auction and sell it to you will notrespond.  If you make an offer as take it or leave it right now Iwill not respond.  Well if do respond hope you have thick skin.

PAYMENT IS DUE UPON AUCTION END.
If have not received payment within 48hrs you will be reported as anonpaying bidder and the boat will be relisted.  PayPal is fine. Overnight express postal money orders are fine.  Cash in person isfine.  48hrs max to pay is not negotiable.

If you have reservations just don't bid.  Seriously.


On Aug-25-19 at 11:39:24 PDT, seller added the following information:In an online group had somebody call me an ass and that others should "beware."  They made out like the boat was junk, but its all my fault because made it junk.

Well may be an ass, but not for any of the reasons they say or imply.  certainly was not dishonest or misleading in my listing.  tried to be thorough.  Its beater that has been in an accident and was repaired.  In case was not clear in my original listing.  The hull is sound.

As to me, "making it that way,"  that's just not true.  contributed, but its not all my fault.  First off suffered from the economic collapse that started at the end of 2005 just like everybody else.  Maybe more than some.  When the market crashed lost 95% of my nest egg.  Almost $400K.  actually was still making pretty good money in my, "day job," and my business did not drop as much as quickly as some others but it did happen.  What killed me was when my wife's parents passed.  She was devastated, and she was basically not working.  Before that we both had good incomes, but it took her over year for her to get back to normal.  Sort of.  Ultimately she closed her business and went to work for big corporation.  I'm not asking for any sympathy.  Just explaining where came from.  didn't have the money to throw at it for several years, but fishing was still my escape from "the world."  used it as is. There was time in my life couldn't imagine not having the money needed for taking care of it, but then there was time in my life when didn't.

I own my business and work my ass off everyday.  Ultimately decided I'd be better off to move onto something else.  Fishing is still my escape from the world, and right now am fishing out of my old 16' jon boat that have owned even longer than the Cougar.  It gets me places the Cat won't go, and like fishing those places.  am looking for another boat, but its going to just be newer variant of my jon boat.  Maybe bigger.  Maybe not, but if can't bump it down back channel skimming the trolling motor with only half dozen or so inches of water over the sand don't want it.

The Cougar has no soft place in my heart.  It doesn't do what want it to do, and I'm tired of looking at it.  It was good boat for me for while, but it isn't anymore.  hope who ever gets it fixes it all up and has the boat of their dreams.  They may get it pretty cheap too.  Last time looked the high bid was only couple hundred dollars.  If that's all it draws then that's what it will sell for.On Aug-28-19 at 11:21:11 PDT, seller added the following information:NO TITLE ON TRAILER

I valued the trailer at zero, but thought had the title laying around.  Sadly can't find the title for the trailer.  looked through everything can think.  had always planned to replace the trailer one way or another so never bothered to take the title over to get one with no lien holder on it when paid it off years ago. can't just go over to DMV and get duplicate title.  They wouldn't even give it to me in Arizona.  They would send it to the lien holder of record.  What big pain in the wazoo.  It would take more of my time than the sale of the boat is worth. I'm just NOT going to spend my time chasing that down.  NOT GOING TO.  DO NOT ASK.

I don't want anybody thinking mislead or cheated them in anyway.  There will be not title coming with the trailer.


This D.U.K.W. AKADuck boat is equiped with rebuilt Perkins diesel motor and rebuilt AUTOMATICAllison Transmission (upgarade from original gas motor and hard shifting manualtransmission that has approx 10 hours on the drive train. It was purchased todo wedding in and was never used since. This ...