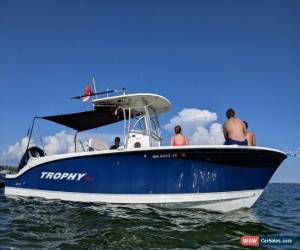 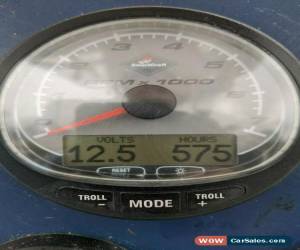 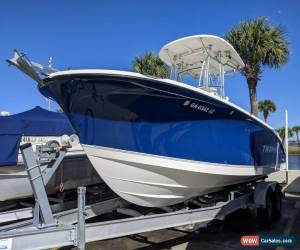 2009 Trophy 2503 Center CosoleJust dropped the price as REALLY need to sell it! Detailed on Feb 2, 2020 and so most of the photos are less than week old!The 2009 Trophy 2503 Center Console was built for fishermen. She's 25-foot, purpose-built sportfishing machine featuring everything you could want, including low-hour STRONG Mercury 275 Verado that has been meticulously maintained.  There's fully enclosed roomy head mounted in the center console for privacy. The manual flushing toilet with an electric discharge pump works great. The helm console is designed with plenty of space all your electronics and the Lowrance HD-8 works perfectly and is loaded with local charts. The GPS is linked with the Northstar Explorer 710 VHF radio so distress call can be made with the press of button.The helm seat can accommodate two comfortably and contains room for tools and the fully-sealed twin battery box. It’s snap to keep the batteries charged with the installed ProSport 12amp double marine charger. Just plug it up and both batteries will get charged or just topped off automatically.Other features include raw water deck wash AND fresh water deck wash. The hard top keeps the sun off your head, it doesn't impede when you're fishing, has four-rod rack at the back and stern-pointed LED Flood light. The padded gunwales are more than high enough to brace against, there are plenty of grab rails and in-gunwale rod holders and the anchor well holds plenty of rope and chain. The anchor windlass means no more hauling in anchor rode and the outriggers allows you to troll with the best.There's also trim tabs, live-bait tank, removable cutting board, plenty of storage compartments, lockers and Yeti-clone drink cooler under the helm. All this and cushioned seating for 10+ to shuttle people back and forth to Shell Island. To make the cruise better, this boat has an upgraded stereo system with subwoofer and Bluetooth. LED interior and marker lights means no more bulb swapping and low electric pull.This is the most comfortable center console I’ve ever owned and we’ve used it for the last years for family fishing trips but mostly taking the family to Shell Island and for snorkeling trips. We opted for an extra shade and its perfect for hanging out at anchor listening to music in the shade.This sale includes the original Karavan trailer (drum brake shoes/springs removed) and have titles for both the boat and trailer. The boat is exceptional and trust it 100% but my kids have grown and left home, my fishing buddy moved and want to buy sailboat now!


Reposting with REDUCED fixed price, best offer or by it now. Make me an offer!2005 Trophy 1903 CC with Merc 150 Saltwater Series and Karavan Trailer. Bought the boat from very reputable dealer in June of 2012 and it's been in the water every year, but very lightly used. Maintained every year and put ...