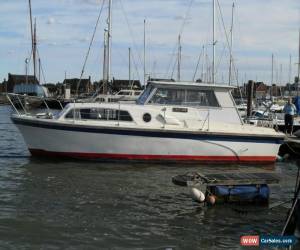 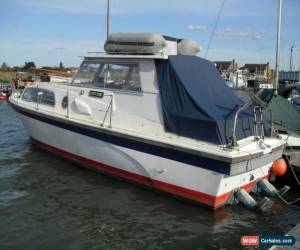 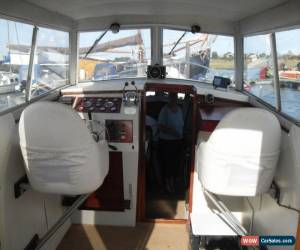 Extensively rebuilt by retired professional boatbuilder thisis tidy example of this spacious and popular design. It would serve as a'liveaboard' for two or as holiday river/estuary and coastal cruiser.The original Volvo Penta (Peugeot) MD21A's have beenreplaced by the later Ford XD2 (Peugeot based) diesels, fitted to Sierras andScorpios.  This also means much cheaperspares They are slightly more powerful at 75 bhp. The port oil pressure isvery good and the starboard oil pressure is very, very good !   Has engine compartment fire extinguisher. It has twin Volvo Penta AQA270 outdrives which take thegears well and have no leaks.  Newbellows fitted.  The hull being built prior to the 'oil crisis' of 1971/2, isa much thicker layup than later hulls and is unsurpassed in strength.The stern and wheelhouse decks have been replaced and newfabric cover made to preserve them.  Theelectrics have been re wired with use of several relays to reduce voltage losswith copious fuses for simplicity. There are two master switches eachcontrolling   two batteries for eachengine.  This gives reliable and separatecabin and starting power.The cabin seat covers and curtains are new. There is aJabsco electric toilet with 'Y' valve for either overboard discharge or to aninterior 'dump' tank.  calorifier heatsthe water from the engine.  There is a'basic' shower, utilising the retractable basin hose assembly. will throw ina gas water heater and vent which could be fitted for residential use.Has two depth gauges, two compasses and basic Sat Nav.(Lat and Long).  Two temperature gaugesare fitted, the second one placed in the water injection bends to give earlywarning of raw water cooling failure.Comes with inflatable and Seagull outboard.An 'Old Lady', not 'mint' but sound, dry and reliable.  Come and have look and have trip aroundthe bay if interested?At present at Blackwater Marina, Mayland (CM3 6EJ) and couldprobably remain or be moved to the Crouch with even easier access to Londonfrom either South Woodham Ferrers, Fambridge, or Burnham.


Built in Finland by Botnia Marin, she is wheelhouse cruiser with with hi fly bridge and excellent accommodation. Her twin 200 hp engines deliver up to 40knots and her present owner has ensured that they have been professionally maintained and no expense spared In addition to the well equipped ...